The many arched rock formations in Arches National Park are the result of natural forces – such as water, ice and extreme temperatures and the subsequent erosion. It took more than 100 million years to form these arcs. One day they will disappear again, because the forces of nature do not stop affecting these naturally created works of art.

On a beautiful sunny day it is almost impossible to visualize these events. However, the evidence of the geological history shown is probably unique, because nowhere else in the world are there more such stone arches (arches) than here. There are around 2,000 – some with openings just a meter long – some, like the gigantic Landscape Arch, even up to 93 meters from one base to the other.

Even today, new stone arches are constantly being formed, while the old ones are increasingly decaying. Erosion and weathering, however, are now slow but relentless. Here it is clearly shown how much the landscape is subject to endless dynamic change.

The beauty and uniqueness of these rock formations led to the area being protected as a national park in November 1971. Numerous hiking trails of various lengths and levels of difficulty along the exceptional natural beauties are available to visitors. Some lead to viewpoints under the arches. Highlights of the park are Balanced Rock and Delicate Arch. These are exceptionally photogenic, especially at sunset, when the sunlight makes the rock appear even redder against the blue sky.

Location and Size
According to transporthint, the national park is located in the northern part of the Colorado Plateau. The park is at an average of 1,499 m above sea level. The highest elevation is the “Elephant Butte” in the east at 1,696 meters.

by air
Flights are available to Grand Junction, Moab and Salt Lake City.

Shuttles and Taxis
Commercial buses and taxis operate between Grand Junction, Moab and other destinations.

Opening Hours and Seasons
Arches National Park is open 24 hours a day, year-round. The Visitor Center is open daily (except December 25) and during the following times: Mid-March to late October: 7:30am to 6:30pm; November to mid-March: 8:00 a.m. to 4:30 p.m.

Admission Fees
Admission to Arches National Park is valid for 7 days.
USD 30 for a private, non-commercial vehicle with up to 15 occupants.
USD 25 for a motorbike, USD 15 for cyclists, hikers, horse riders.

Climate and Weather:
Southeast Utah is part of the Colorado Plateau, a high desert region with very strong temperature fluctuations. The temperate (and most popular) times of the year are spring (April to May) and autumn (mid-September to October), when average daily temperatures range from 16° to 27°C and minimum temperatures average -1° to 10°C.

The temperatures in summer often reach more than 38° C, so that difficult and longer tours become dangerous. Late summer often brings violent storms that can lead to flash floods.

Winters are cold, with highs of -1° to 10° C, and lows averaging -18° to -7° C. Although heavy snowfalls are rare (except in nearby mountains), small amounts of snow or ice can also affect trails and roads make impassable.

Activities
Traveling by car
Driving through Arches National Park by car is a particularly attractive experience with many highlights. It should be noted that all popular trailheads such as Delicate Arch and Devils Garden have limited parking and fill up very quickly.

If you have 1.5 hours
Drive to the Windows Section and admire some of the largest arches in the park (It takes half an hour to hike to the North Window or Double Arch.). Alternatively, drive to the Delicate Arch Viewpoint and see the world’s most famous arch. On the way back, stop at Wolfe Ranch and imagine what it would be like to have lived on this homestead in the relatively barren area in the late 1800s.

If you have more than 4.5 hours
Drive all the paved roads in the park, spend 10 minutes at each lookout point, and be sure to visit the Windows Section, Wolfe Ranch, and Delicate Arch lookout point.

Hiking
Arches National Park is a very family-friendly park, numerous sights can be reached via beautiful hiking trails.
A lot is also clearly visible from the car, but you only become aware of the atmospheric aura of the impressions of time, silence and gigantic proportions if you take some time to hike in this special landscape. The Visitor Center is available for tips on how to best enjoy the time. An orientation film provides additional information. Magazines, brochures, maps and other merchandise can also be found here.

There are no places to eat or sleep in the national park; Moab offers extensive visitor services. The Devils Garden campsite, which is open all year round, has 52 pitches and central toilet facilities with running water. There are two group pitches (tents only, no RVs) for groups of 11 and over. A reservation for individual pitches as well as for group pitches must be made at least 4 days in advance.

Backcountry Activities
Hikers planning an overnight stay must obtain a permit from the Visitor Center. There are no hiking trails or campsites in the backcountry. When camping, great care should be taken to ensure that the natural environment is disturbed as little as possible. Drinking water must be carried. Fire pits are not allowed.

Flora and fauna in the park
Pinyon pines and gnarled juniper bushes form a colorful contrast to the reddish sandstone landscape. In good conditions, countless beautiful wildflowers bloom from April to July. Most mammals are nocturnal, but with a bit of luck mule deer and kit foxes can be spotted, while hares and rabbits, kangaroo rats and other rodents and small reptiles are a little more common. The chatter of flocks of blue pinyon jays echoes from the treetops. Patient observers will also encounter migratory birds such as the mountain warbler and residents such as the golden eagle. 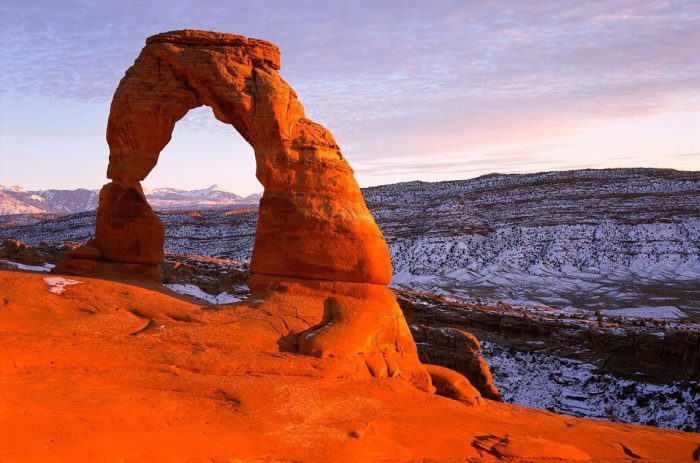