Canyon de Chelly (pronounced “de schei”) National Monument is located on the Navajo Reservation near Chinle. In 1931, the canyon became a national monument along with Canyon del Muerto and Monument Canyon. The name “de Chelly” is derived from “Tséyi”, which means something like “gorge” in the Navajo language. Earth shifts and river currents have formed a unique, colorful rocky landscape over millions of years. Natural water sources and fertile soil ensured that the ancestral peoples were able to cultivate crops and crops for thousands of years.

People have lived in the Canyon continuously for more than 5,000 years – longer than anywhere else on the Colorado Plateau. Remains of houses and rock paintings on the walls of the canyon tell their exciting story. Today, the Navajo (or Dine’) still live in the canyon, tending and cultivating the fields as their ancestors did.

The first settlers lived in simple pit houses (translated: pit houses), later residential buildings were built. Dwellings were built into the wall niches to protect them from external environmental influences. Until the middle of the 13th century. these peoples thrived in the canyon before moving on to find better farmland. At the beginning of the 14th century, the Anasazi left Canyon de Chelly. Drought, overexploitation of the fields and certainly conflicts with other peoples were probably the causes. They continued south and west in search of areas offering better living conditions. After that came the Hopi and then, in the late 16th-early 17th centuries, the Navajo.

Some of the evidence of human settlement can be seen from the lookout points along the two roads that line the rims of the canyons. Among them is the White House Ruin, a small settlement built around 1,000 years ago – at the time of the early Pueblo culture. The outer wall of the main house is made of white stone. Hence the name. A 2km path leads from the White House Overlook to the ruins.

According to topmbadirectory, the Canyon de Chelly was formed by rivers from the nearby Chuska Mountains, which dug into the red sandstone of the Colorado Plateau over two million years and thus formed the bizarre canyon landscape. At the exit, where the canyons meet, the cliffs are only a few meters high, inside the canyons they sometimes reach a height of more than 300 m. The Chinle Wash, which flows through the canyon, only carries water in the winter half of the year, during the river bed has dried up in summer.

One of the main attractions – and landmark – of Canyon de Chelly is Spider Rock, a mountain formation composed of two 800-foot (240 m) high sea stacks. Historical rock paintings tell about the everyday life and the legends of the Najavos. In the visitor center you can learn more about the Indian culture and the formation of the canyons.

Getting there
Canyon de Chelly National Monument is easily accessible by car from Flagstaff via Interstate 40 East & Highway 191 North. Or you can travel via Gallup (to the east) and Hwy 264. Chinle, the closest town, is a few minutes’ drive from the park entrance. The nearest airports are Farmington (NM), Gallup (NM) and Flagstaff (AZ). There are also train and bus connections in Gallup (NM).

Opening Times and Seasons
Canyon de Chelly National Monument is open year-round. The visitor center is open daily from 08:00 to 17:00 (except on Christmas Day). The North & South Rim Drive and the White House Trail are also open year-round, the roads are paved and no 4WD vehicle is required. In the event of severe weather warnings, the visitor center will be opened later or remain closed all day.

Entrance fees
The park is freely accessible to all visitors. However, voluntary donations are gladly accepted at the Visitor Center. You don’t need a backcountry permit or a Navajo guide to drive the North & South Rim Drive or hike the White House Trail.

However, to get into Canyon de Chelly, a backcountry permit and a Navajo guide are required. Fees for these tours vary. Tours by car, horse or on foot are generally possible all year round, but can be restricted at short notice due to severe weather warnings.

Campgrounds
There are two campgrounds within Canyon de Chelly National Monument. The basic Cottonwood Campground (no showers or hook-ups) and the privately owned Spider Rock Campground.

Spring: Spring weather is mostly cool and windy with highs of 10-20°C. Warning: Dust storms and/or flooding can be unexpected.

Summer: Summer is generally hot and dry. Maximum values ​​range from 27 to 35° C. Be sure to take enough water with you and drink a lot.

Autumn: Autumn is warm and sometimes rainy. One should be prepared for unpredictable thunderstorms & floods.

Winter: Winter is usually cold and windy. The maximum temperatures range from 5 – 15°C, but the average temperatures are only -5 degrees. Snowfall and freezing cold nights are not uncommon.

Clothing
Good gear, clothing appropriate to the season and sound planning are essential to ensure a safe and enjoyable stay.

A visit should begin at the Visitor Center, where an orientation video can be viewed. Both the 16-mile (25 km) long South Rim and the 18-mile (29 km) long North Rim Drive start from here. You should reckon with approx. 2 to 3 hours walking time for the tours.

The White House Trail is a 3-mile, strenuous hiking trail. You should plan about 2 hours for the entire hike. Take enough drinking water with you!

If you have 2 hours: 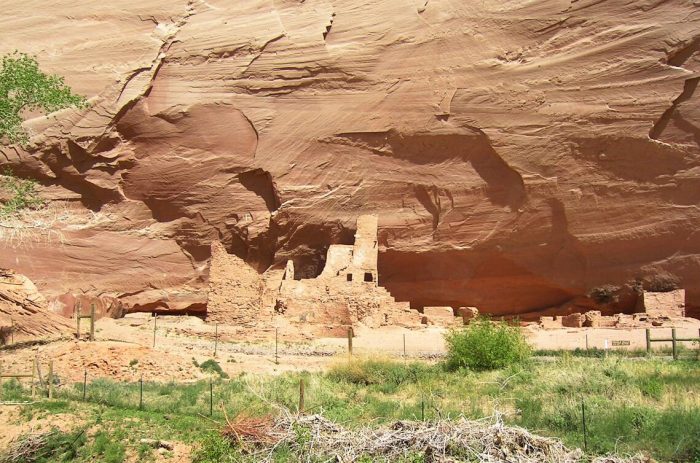