FROM ECKHART’S MYSTICISM TO KANT’S ENLIGHTENMENT

The first expression of the German philosophical genius can be seen in the speculative mysticism that flourished in Germany in the late Middle Ages, which has its major representatives in Meister Eckhart (ca. 1260-1327), J. Tauler (ca. 1300-61) and H. Suso (ca. 1295-1366), to which must be added the famous Germanic Theology, an anonymous work of the century. XIV-XV. This current is characterized by a profound pathos religious who expresses himself in the search for an immediate communion with God (beyond historical revelation itself) and makes use of scholastic philosophical terminology for a speculative justification of its possibilities. The coexistence of the religious moment and the speculative moment constitutes a general trait of German philosophy, with the prevalence of the second over the first and the consequent secularization of religious elements separated from their original context. The new flowering of sixteenth-century mysticism in Germany stirred by the Reformation, which culminates in the speculation of J. Böhme (1575-1624) and where the new mysticism differs from the medieval one for a more realistic vision of nature (in tune with this to the rediscovery renaissance of the body of nature) understood as the scene of the cosmic drama of sin and redemption: it is thus able to assimilate gnostic and kabbalistic elements and in some cases also magical (typical figure of Agrippa of Nettesheim, 1486-1535). GW Leibniz (1646-1716) is the expression of a controlled rationalism that does not evade theological problematic in its even more embarrassing aspects (think of his famous theodicy). The rationalistic motif prevails instead in his follower Ch. Wolff (1679-1754), initiator of the Enlightenment German, and his numerous disciples. Wolff shares the Enlightenment conception of philosophy as an activity aimed at the achievement of human happiness through the ever wider extension of knowledge, but his philosophizing is rigorously logical and systematic and leads to a grandiose philosophical encyclopedia, in which logic finds its place. as much as metaphysics and practical philosophy. However, the Enlightenment attitude also found expression in an agile and popular literature, which defended religious rationalism, defining positive religions (including Christianity) as inadequate but necessary forms of the development of mankind that culminates in the establishment of a purely rational religion: this is the central theme of GE Lessing ‘s thinking (1729-81), the greatest exponent of this current whose representatives gave many contributions to the deepening of particular problems such as logic and aesthetics. The figure of I. Kant (1724-1804) is placed between the Enlightenment and Romanticism, determined to continue the Enlightenment program in delimiting the possibilities of human reason in the light of reason itself and in emphasizing the ethical content of religion to be asserted only in what can be assumed within the limits of reason in its practical use. However, he went beyond the Enlightenment horizon for the depth to which he pushed the treatment of this problem, such as to open new horizons to European thought.

FROM ROMANTICISM TO NEO-POSITIVISM

According to physicscat.com, the most important creative moment of German philosophy for the contemporary world is Romanticism, which has its philosophical expression in JG Fichte (1762-1814), FW Schelling (1775-1854) and GWF Hegel (1770-1831). The “longing for the infinite” characteristic of romanticism finds its expression, albeit in a different guise of concepts, in Fichte and Schelling who reopen man to the Absolute. Hegel collects the needs of romanticism and concludes it by substituting philosophy as an aspiration to infinity with philosophy as possession of it, with the immediacy of ethical and sentimental intuition the mediation of reason, on the basis of which (and the triadic motif that constitutes the his immanent law) he claims to reconstruct reality as a whole (in its natural and historical aspects) by reabsorbing it into the lines of a coherent and unitary system. An epigone of romanticism is A. Schopenhauer (1788-1860), whose system stands in antithesis to the Hegelian one, in that it considers the world as the expression of an irrational will; and only by denying it does man reach his end. Hegel and Schopenhauer are somewhat emblematic figures of German philosophy. Existentialism arises from the criticism of Hegelism in the name of the individual whose negativity he emphasizes; at the same time, Marxism attempts the overturning of the Hegelian system by opposing idealism and its contemplative attitude with a philosophy which, starting from man, poses itself as capable of actively transforming reality. With Schopenhauer, on the other hand, a demystification begins which has found its most complete expression in F. Nietzsche (1844-1900) informing a large part of contemporary culture and letting us see notable advances of depth psychology, which is also from S. Freud (1856-1939) onwards an indisputable component of our culture. Existentialism and Marxism constitute the dominant climate of contemporary German philosophy: the first has however recovered an ontological theme (think of M. Heidegger, 1889-1976) and the second tends to assume the figure of an increasingly subtle and fierce social criticism and redeem elements of utopian thought (E. Bloch, 1885-1977). Together with them and the cultural elements already mentioned, this philosophy still finds expression in the continuation of the phenomenology of E. Husserl (1859-1938), which brings to the fore epistemological and methodological problems, and to a lesser extent in neo-positivism, proposed by Austrian and German thinkers, but developed above all in Anglo-Saxon countries. 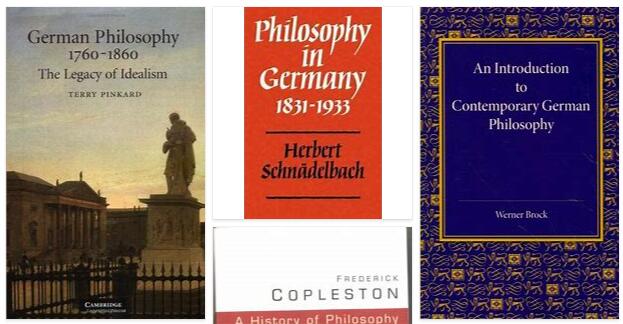