Belfast Cathedral
(St Anne’s Cathedral)
The Belfast Cathedral of the “Church of Ireland” was built between 1899 and 1932. In 1941 it was destroyed during the Belfast Blitz, but could be rebuilt from 1955 to 1981. In 2007 a steel tower was built on the St. Annes, which was called the “Spire of Hope”. It is illuminated at night. St. Anne’s Cathedral is for the special custom of the Christmass Sit Out known. This tradition goes back to former dean Samuel B Crooks (also known as “Black Santa”), who began in 1976 to spend the week before Christmas on the cathedral steps to raise funds. This custom still exists, and church dignitaries sit on the outside steps of the church from 10 a.m. to 5 p.m. collecting money for charitable purposes. 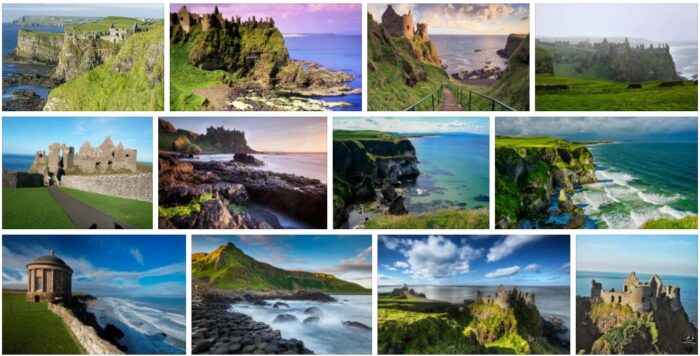 Bangor Abbey
The building was originally founded in the middle of the 6th century.

St. Columban’s Cathedral in Derry
This is the largest Anglican church in Ireland.

Downpatrick Cathedral
The church’s shrines and altar shrines are particularly noteworthy. Here is also the grave of the Irish national saint Patrick, who was buried in 192/3 and on the day of his death on March 17th every year numerous pilgrims arrive.

Monastery in Armagh
The building from the 5th century contains a library with around 20,000 valuable books and manuscripts including a copy of “Gulliver’s Travels” with original corrections by Swift.

Gothic Cathedral of Armagh
In the west of the city is this also worth seeing church with its ornate Italian interior decorations. Nendrum Monastery The Nendrum Monastery was founded with the blessing of St. Patrick and had its heyday in the year 1000. It is known for its beautiful location on a small island and has its own museum.

Queen’s University in Belfast was built by Charles Lanyon in 1849. The botanical garden is particularly worth seeing. The university was originally founded as Queens College Belfast. Nowadays it offers places for around 25,000 students. Their beautiful Edwardian-style terraces have magnolia trees in their front gardens.
University Rd
Belfast
Tel: 0044 – (0) 28 9024 5133
www.qub.ac.uk

The Gobbins Cliff Walk
This spectacular cliff walk is located on the northeast coast approximately 25 km (air line) northeast of Belfast on the Causeway Coastal Route. It was built in 1902 according to plans by the Irish engineer Berkeley Deane Wise (1855-1909) and meanders along the basalt cliffs above the Irish Sea. After the construction, a real tourist boom set in, but the path had to be closed in 1954 for financial reasons and lack of material. It didn’t reopen until 2015 after investing around £ 7.5million, but closed a year later due to a rock fall. It was reopened in 2017.
The path is around 4.5 km long and the visitor has to climb around 1,200 steps. It leads over small bridges and is secured by steel cables and railings. The path with its narrow paths and deep gorges may only be walked with safety helmets in a guided group. If you are not free from vertigo, you should refrain from the hike.
It is worth mentioning that the local hawthorn trees were not allowed to be felled during the construction, as, according to the local people, they were the seat of fairies who were supposed to feed on the nectar of the nearby bluebells.

Coastal Pathway
This small, paved walking path runs along the coast from Bangor to Holywood.

Rathlin Island
In the west of this small, partially protected island off the north-east coast of the country, there is an observation point for sea birds (Seabird Viewpoint). Kittiwakes and puffins are native here. The cliffs, which are up to 70 m high, are also impressive.

Mountains of Morne south-east of Belfast
A historic stone wall, which was once supposed to prevent smuggling, still runs through the mountain range today. Northern Ireland’s highest mountain, the 850-high Slieve Donard, is one of the 12 peaks.

Lough Neagh (Loch nEathach) near Belfast
The largest lake in the British Isles covers an area of ​​396 km², is 30 km long, 15 km wide, up to 25 m deep and is drained by the river Bann. It is located about 30 km west of Belfast.

Slieve Donard
From the top of the 852 m high Slieve Donard you can see the Isle of Man and the entire lake Strangford Lough in good weather.

Lough Neagh The
UK’s largest lake, Lough Neagh, is known for its eels, which are exported from the Ulster region as delicacies around the world. The Lough Neagh Discovery Center offers interesting insights into the fauna and flora of Northern Ireland.

Strangford Lough
This lake, like Lough Neagh, is ideal for observing migratory birds, some of which even come from Canada and Greenland to spend the mild winters here.

Marble Arch Caves at Fermanagh
The tour of these limestone caves begins with an underground boat trip.

Bangor Marina
The harbor has an average tidal range of around 2.50 m.

Port of Belfast
The Port of Belfast (Prt of Belfast) cannot be overestimated for its importance to the economy of Northern Ireland. It is the industrial and commercial center of the capital and is visited by up to 9,000 ships every year. About 2/3 of Northern Irish and 1/4 of all Irish sea trade is handled through it. The port is also Ireland’s busiest ferry port with around 2 million passengers a year. The large cruise ships also stop here. Routes that start from the Port of Belfast include trips with the Stena Line to Stranraer, Scotland, with the Norfolkline to Liverpool and with the Isle of Man Steam Packet Company to the Isle of Man.