German, Swiss and Austrian nationals only need a passport or identity card to enter Northern Ireland.

Goods import and export
The following articles can be imported duty-free into Great Britain and Northern Ireland (when entering from non-EU countries):

The import and export of drugs, pornographic material, weapons, ammunition or explosives is strictly prohibited. This also applies to some weapons that can be legally purchased in Germany, such as CS gas spray cans, blank guns, knives with fixed blades or snap knives with blades longer than 7 cm. The import and export of plants and animals protected by the Washington Species Protection Act is also strictly prohibited.

Northern Ireland: getting there and transport

How do you get to Northern Ireland?

Direct flights with British Airways or BMI British Midland go from London and all major cities in Great Britain to Belfast. In addition, there are, for example, cheap direct flights with EasyJet from Berlin-Schönefeld. There are two international airports at Belfast and another at Derry.

Travel in the country

Railway
Northern Ireland has a total rail network of approximately 340 km. The four main train connections run from Belfast to Derry or Portrush, to the port city of Larne, to Bangor and in a southerly direction to Dublin in the Republic of Ireland.
More information is available at: www.nirailways.co.uk

Taxis
The main train stations, ports and the airport have taxi ranks. Taxis can also be booked by telephone in the larger towns.

Ferry connections
There are the following ferry connections between Great Britain and Northern Ireland: Stranraer (southern Scotland) – Belfast (www.stenaline.com), Cairnryan (southern Scotland) or Fleetwood – Larne (www.irishferries.com), Troon, Heysham and Douglas (Isle of Man)) – Belfast (www.steam-packet.com) and Liverpool – Belfast (www.norsemerchant.com).
In addition, there is of course the option of entering Ireland. There is a ferry service between mainland Europe (Le Havre or Cherbourg) and Ireland (Rosslare) as well as between Great Britain (Pembroke) and Rosslare (www.irishferries.com).
There is also a regular ferry service between Ballycastle and Rathlin Island. 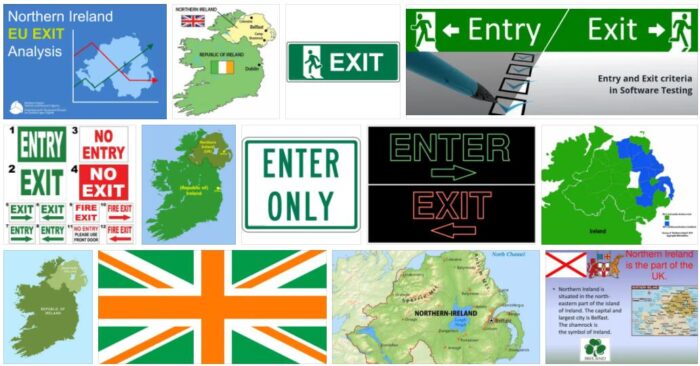 To avoid trouble with the police or even the courts, drivers should strictly adhere to the traffic regulations in force in the country. Regardless of the information given here, it is advisable to obtain more detailed information from the ADAC, the AvD or the Northern Ireland Transport Club.

In addition, it is of course necessary to pay attention to the current local speed limits, which are indicated by traffic signs.

Specific rules
As in the rest of the UK, there is left-hand traffic.