Northern Ireland covers an area of ​​13,843 km² and shares a border with the Republic of Ireland of 360 km.

Northern Ireland has a coast to the Atlantic Ocean with a length of around 500 km. 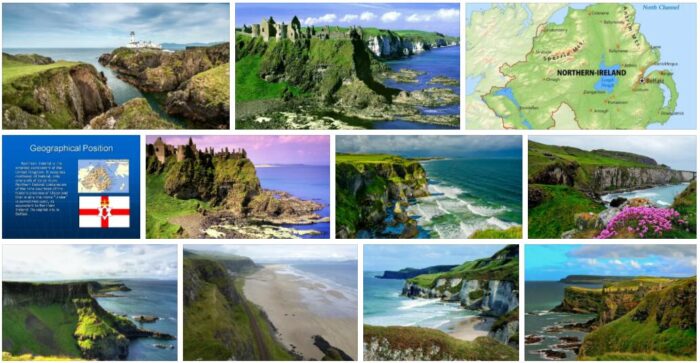 Northern Ireland is located in the northeast of the Irish island, about the same height as southern Scotland. The landscape is mainly characterized by the three mountain ranges of the Sperrin Mountains, the Antrim Hills and the Morne Mountains.
It is part of the “United Kingdom of Great Britain and Northern Ireland” (UK) – with extensive autonomy. Northern Ireland is divided into six counties – Derry (Londenderry), Antrim, Down, Tyrone, Fermanagh and Armagh.
Northern Ireland covers an area of ​​13,843 km² and shares a border with the Republic of Ireland of 360 km.

Northern Ireland has a coast to the Atlantic Ocean with a length of around 500 km.

In Bangor, the mean tidal range is around 2.50 m.
For detailed explanations of ebb and flow, see Tides, Ebb and Flow.

Compare
The world’s highest tidal range can be found in the Bay of Fundy in Canada, where it is up to 16 m, and at spring tide even over 20 m. The Bay of Fundy is located on the Atlantic between the Canadian provinces of New Brunswick and Nova Scotia, which is called Nova Scotia in German and whose capital is Halifax. On the German North Sea coast it varies between 1 m and 3 m. In the western Baltic Sea, on the other hand, the tidal range is only 0.3 m, while it is barely noticeable in the eastern Baltic Sea.

You can find detailed information on this subject under Longitude and Latitude.

For Northern Ireland, the following value applies to Central European Time (CET), i.e. the time (without summer time) in Germany, Austria and Switzerland. A minus sign means that it is earlier there and a plus sign that it is later than after CET:

Further and detailed explanations of the time can be found under Time zones, time.

This is the highest level above the horizon (exactly: above the chimney) that the sun rises in Belfast during the year.

There are three mountain ranges in Northern Ireland:

Slieve Donard
The highest mountain is the Slieve Donard in the Morne Mountains with a height of 852 m.

Lagan, Foyle
Other rivers are the Lagan with a length of approx. 60 km and the Foyle.

Rathlin
The small island of Rathlin belongs to the territory of Northern Ireland. It is located off the north-east coast of the country, just 25 km from the Scottish Mull of Kintyre peninsula.

North Channel
The North Channel is a strait between Scotland and Northern Ireland and connects the Irish Sea with the Atlantic. In the canal is the small Northern Irish island of Rathlin, which is inhabited by around 100 people. The island is called by a car ferry from Bellycastle to the island’s port – Church Bay. At its narrowest point between Fair Head near Bellycastle in Northern Ireland and the Mull of Kintyre on the Scottish Kintyre Peninsula, the North Channel is just over 20 km wide, with a total length of around 160 km.

Irish Sea
Northern Ireland borders to the east with the Irish Sea, which is located between the islands of Great Britain and Ireland.