The earliest documented settlement of the island began at the latest around 7000 BC by Mesolithic groups of hunters and gatherers who were probably immigrating from what is now northern England and Scotland. From the 4th millennium BC An early Stone Age farming culture developed within which megalithic buildings were built. From 2500 BC Through continental influences, techniques of copper and bronze working were introduced. Finds from the late Bronze Age (from around 1200) show an increasing skill in the manufacture of jewelry, tools and weapons. The transition from the Bronze Age to the Iron Age occurred around 300 BC. BC But already from 600 BC The Celtic tribe of the Gael reached Ireland and established around 150 small kingdoms. These kings also carried out raids on Roman-occupied England and Wales. In the 5th century, St. Patrick the residents of the island, after which numerous monasteries were formed. Irish monastic culture represented a heyday of culture and education on the island. In the 8th and 9th centuries there were numerous incursions by the Scandinavian Vikings. These settled on the east coast and founded the first Irish cities.

In 1014, under the rule of the High King Brian Boru, the Irish finally defeated the Vikings. In 1066 the Normans took over power in England with William the Conqueror and took large swaths of Ireland. With the Synod of Cashel in 1101, the subordination of the 36 Irish bishoprics and monasteries to the Roman Church was initiated. From 1155, the English King Henry II installed Anglo-Norman feudal lords in the eastern part of the island, who increasingly expanded their influence. They built cities, monasteries and cathedrals. In 1172 Henry II was recognized as ruler of Ireland. England won in the 12th and early 13th centuriesin power in Ireland. In the northwest of the island, today’s Northern Ireland, as well as in the southeast, however, some remote Irish principalities were preserved. They allied themselves with the Vikings and achieved some successes in the fight against the conquerors by the end of the 13th century. Norman rule in Ireland was greatly weakened during the 14th century and came to an end in the 15th century. The Irish national feeling strengthened.

In 1534 the English King Henry VIII (1491-1547) extended his power to the island and in 1541 assumed the title of “King of Ireland”. He confiscated all the goods of the Catholic Church and initiated a massive and targeted settlement of English on the island. The Irish were politically and religiously oppressed. This oppression increased under Elizabeth I (1533-1603), the daughter of Henry VIII. The Irish resistance, in the form of a guerrilla war, remained relatively unsuccessful for decades. In 1598, however, with financial support from Catholic Spain, a decisive victory was achieved under Hugh O’Neill. But as early as 1603 the Irish had to submit to the English again and English law was introduced on the island. From 1608, more Scottish and English Protestants were settled in Ulster, the last Gaelic resistance region. This is where the historical origin of the Northern Irish Civil War lay. The English Lord Oliver Cromwell cruelly put down an uprising by the Irish in 1649. In 1690 there was the battle on the River Boyne, in which two English kings faced each other. On the Irish side, James II fought against William of Orange, who won the battle. The English established themselves even more strongly on the island. From 1691, the English penal code excluded Irish Catholics from the right to land. English Protestants then took over large parts of the country and seized political power. In 1695 a number of criminal laws were passed against Catholics, among others they were no longer allowed to carry weapons and not educate their children. In 1697 the Catholic faith and its practice were completely forbidden. Many Irish emigrated to America as a result. Stricter trade laws made Ireland one of the poorest countries in Europe.

In the 18th and 19th centuries

In 1782 England recognized an independent Irish parliament. However, only Protestants sat in parliament. They achieved a commercial and constitutional improvement for Ireland. In the course of the French Revolution, the “United Irishmen” under Theobald Wolfe Tone demanded the introduction of the Republic of Ireland. Tone was arrested by the English, committed suicide and went down in Irish history as a martyr. The Irish Parliament dissolved itself in 1800 after bribing the English. In 1801 Ireland was annexed to Great Britain with the “Act of Union”which was now called the “United Kingdom of Great Britain and Ireland”. The Irish now had 100 members in the London Parliament instead of their own parliament. Many large landowners then left the island, triggering an economic crisis in Ireland. From 1803, secret societies were founded against the remaining large landowners. The mass movement that emerged from the Catholic Association founded in 1823 achieved the repeal of anti-Catholic laws. Catholics could now also move into parliament.

From 1845 to 1851 there was a great famine in Ireland, which claimed around 1.5 million victims. Ultimately, the cause was the almost monocultural potato cultivation decreed by the English. In the course of the ensuing wave of emigration, another million Irish people left the country and mostly emigrated to the USA.

In the 20th century

Numerous independence movements against the British occupation formed between 1858 and 1916. Irish emigrants founded the forerunner of the IRA (Irish Republican Army), the Fenion Society, in New York. The Sinn Féin party (meaning: we ourselves) has existed since 1905. On April 24, 1916, independence was proclaimed in Dublin. The uprising went down in history as the “Easter Rising” and was cruelly put down by the British. In 1919, the Irish MPs founded their own parliament, proclaimed independence again and established a government. The Irish War of Independence between the British and the IRA followed. On December 6, 1921, Ireland became a Free State within Great Britain. 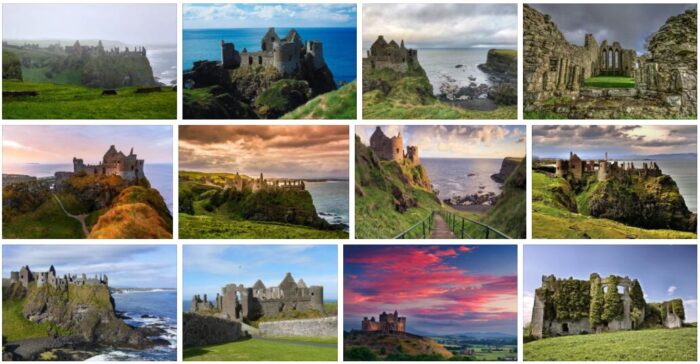 Already at that time, six of the nine counties of Ulster (Antrim, Armagh, Derry, Down, Fermanagh and Tyrone), in which a relatively large part of the population was Protestant, i.e. originally from England and Scotland, voted to remain in the British Kingdom. As a result, Northern Ireland was split off from the rest of the island.

In 1971 the UK government passed the Internment Act which allowed prisoners to be held for up to a year without charge, lawyer or trial. From 1972 Northern Ireland was placed directly under the government of London. Since then, the IRA has also carried out attacks on targets in Great Britain and on British facilities on the European continent. On January 30th, 1972 “Bloody Sunday” took place in Derry, when British paratroopers shot 14 unarmed civil rights activists in a demonstration. This was followed by bombings and other attacks, retaliatory measures, demonstrations, street battles and executions for 30 years. 1980 Bobby Sands and nine of his colleagues died as a result of a hunger strike that was carried out in order to obtain recognition as political prisoners (the British government has always classified such prisoners as criminals). During his strike, Sands was elected to the British Parliament by the people. After his death, the Sinn Féin achieved an overwhelming election success and its chairman Gerry Adams entered parliament in 1983. In 1994 the IRA issued a ceasefire declaration as a result of negotiations, which the Protestant militias also joined the following year. In 1998 the governments of Great Britain and Northern Ireland signed the so-called Good Friday Agreement together with the Northern Irish conflicting parties, the main content of which was the creation of a Northern Irish regional parliament, passed the disarmament of the paramilitary groups and the renunciation of Northern Irish territory by the Republic of Ireland and which was confirmed in separate referendums by the citizens of Ireland and Northern Ireland in the same year. At the same time the British government abolished the internment law and ended its direct rule over Northern Ireland the following year. However, she took the terrorist attacks of September 2001 as an opportunity to reintroduce the Internment Act. In October 2002, London again took over direct government power, as Unionists and Sinn Féin failed to form a joint government. The parliamentary elections in November 2003 were won by the Protestant DUP, headed by Paisley, while the radical forces on both sides were growing stronger. The next parliamentary election, Another attempt to form an independent government was planned for March 7, 2007. The point of contention was, among other things, the previous non-recognition of the Northern Irish police by the Sinn Féin, as they are predominantly made up of Protestants. but on July 31, 2007 the British Army withdrew from Northern Ireland. From then on, the Northern Ireland Police assumed responsibility for the country’s internal security.
The election resulted in the following result: